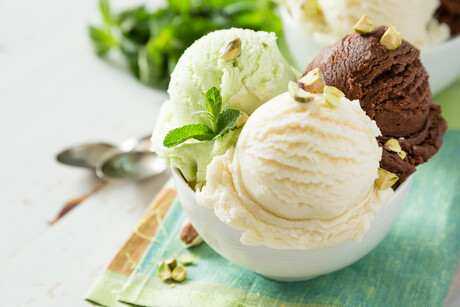 The existing freezing plant at Mackie's Aberdeenshire plant will be replaced with this new system, which combines biomass heating and absorption cooling.

Mackie's currently produces over 10 million litres of ice cream per year and has environmental plans of achieving CO2 reductions of 90% and energy cost savings of 70 to 80%.

Over the years, the manufacturer has invested in renewable energy, including four wind turbines and a solar farm in Scotland. Its latest green initiative involves replacing the gases used in its refrigeration systems from 'partially halogenated' chlorofluorocarbons (HCFCs), which have a high global warming potential, with ammonia.

Ammonia is claimed to be a natural, environmentally friendly refrigerant that has no impact on global warming or ozone depletion.

Scott White, GEA's Sales Manager, said his company has a wealth of experience in designing and installing systems based on and using this ammonia technology. As Mackie's had no experience with this refrigerant, he said GEA provided assistance with all the process and regulatory issues that needed to be addressed.

The GEA equipment order is said to be worth around 4.5 million British pounds (AU$8.1 million).

NORD DRIVESYSTEMS has a range of hygiene-friendly products for the bakery industry.

The Series EDA Electronic Pressure Controller can replace a separate gauge, two switches and a...

Now compatible with the glass, can and PET container segments, its compact design means users...

Water discovered on the sunlit surface of the Moon