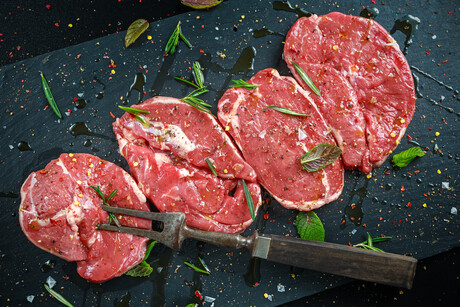 A lamb processing facility in the Bay of Plenty, New Zealand was experiencing severe carryback on a conveyor in their lamb processing room. The conveyor was seeing over 20 kg of carryback per day, which meant a huge amount of product waste and a hit to the bottom line of the company.

There are eight conveyors in the lamb cut room, two modular and six white nitrile plied belts. The two modular belts experienced the most carryback and presented challenges for the site. These two belts were located in the cold-boning lamb processing facility, which operated two, eight-hour shifts per day.

The meat processing company originally had a cleaner which consisted of segmented blades mounted onto a head pole. This cleaner was then mounted onto the head pulley with the blades tensioned via a counterweight system.

“The cleaner was of poor design, but that was all the market had to offer at the time,” explains Peter Mueller, Senior Supervisor in the Lamb Cut Room.

The counterweight system did not work well in the application, with the blades needing to be cleaned every 15–20 minutes, causing production to stop three or four times per hour.

The main reason for excess stoppage in production was the counterweight system, which was extremely difficult to tension, explains Mueller.

The excessive amount of carryback also meant that whole cuts of meat would bypass the cleaner, travelling onto the return side of the belt and drop to the floor, making it unfit for human consumption.

The company was losing hundreds of dollars per week in lamb that was being dropped onto the floor because it wasn’t able to be sold and contribute to the profit of the company.

In search of a solution

In search of a solution to these production-halting issues, Mueller visited the Flexco stand at the Foodtech Packtech tradeshow in Auckland, New Zealand in 2016 where Flexco was exhibiting the Food Grade Primary (FGP) Cleaner. As mentioned before, the product offered a solution to fill a gap in the market space, where no solution of the same calibre was available. 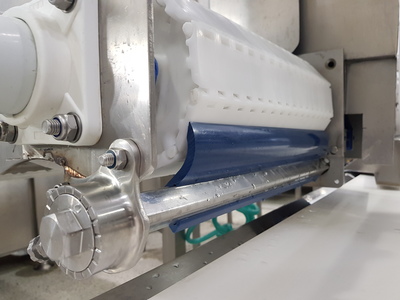 Mueller made the decision to implement the Flexco stainless steel FGP cleaner, which features an FDA approved, metal detectable blade. After installing the cleaner, the company saw an almost complete and immediate reduction in carryback, with 20 kg worth of product being saved per day, just on the one conveyor. The cleaner was installed in 2016 and two years later, the results still stand — with room for the same outstanding results to be seen on other conveyors in the lamb processing room.

By reducing carryback, the company salvaged “up to 20 kg per day, depending on cuts and room speed”, Mueller said. The company was able to add to their stock levels, instead of constantly throwing spoilt meat in the bin. This meant added profitability for the company.

By installing the new cleaner, Flexco also eliminated the need for the cleaning system to be constantly cleaned and maintained.

As Mueller explains: “as long as the tension is set correctly, they do not need clearing all day,” allowing production to be constant throughout both eight-hour shifts without interruption. By eliminating the need for constant maintenance, the company saved labour charges of over NZ$2,500 per year.

Apart from monetary savings in wages for the excess labour required, the company also gained time and increased productivity as staff were now free to perform other productivity-boosting tasks instead of constantly reacting to the same problem.

Flexco’s FGP Cleaner was able to increase productivity by reducing the amount of labour-intensive hours spent cleaning and maintaining tension on the previous, ineffective cleaner. Flexco was also able to save the company a considerable amount of money, which could be put to more effective uses, adding to the profitability of the company and toward the purchase of additional resources to better the company’s output.

The global frozen food market was estimated to be worth around AU$162 billion in 2018 and is...

While renting plastic pallets in Australia has been an option for many years, there is now an...

Rapid COVID-19 tests to be rolled out in Africa

Children use both brain hemispheres to understand language

Air pollution may have increased COVID-19 deaths by 15%

COVID-19 and the vulnerability of remote Indigenous communities