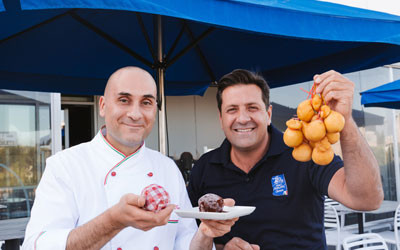 That’s Amore Cheese received two of the 12 awards given out at the Australian Grand Dairy Awards. The awards were held on Thursday, 6 February 2020, with the Melbourne-based cheese manufacturer receiving awards for its Cheese Diavoletti (Flavoured Cheese) and Gelato Tartufo (Dairy Dessert). The Cheese Diavoletti is a small provolina shaped smoked cheese with a chilli stuffed olive at its centre. The Gelato Tartufo is a hazelnut and chocolate gelato with a dark chocolate ganache centre, coated in cocoa powder.

“The balance of the mild cheese, with salty olive and a kick of chilli, makes for a wonderfully unexpected taste sensation. The name translates to ‘little devils’, which is fun. The Diavoletti has won many awards and it is fantastic to add this Australian Grand Dairy Award to the recognition. To win one Australian Dairy Award is amazing, but to win two is a dream come true. The team work so hard every day to produce the best quality product for our customers. We love making tasty and unique cheeses and desserts and to be recognised with two awards will spur us on to keep creating!” said Giorgio Linguanti, Managing Director at That’s Amore Cheese.

The Australian Grand Dairy Awards were established to recognise excellence and quality in the dairy industry. To win, products have to have won a state-based gold medal and are then judged by two panels of trained judges of various backgrounds, including technical dairy experts, food experts, retailers, brewers, cheesemongers and chefs, to provide a broad spectrum of skill to judge the awards.